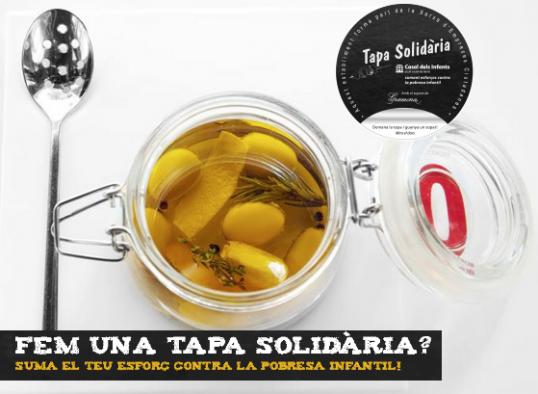 After three months of activity, the third edition of La Tapa Solidaria, driven by Casal dels Infants of Barcelona, comes to an end with a total fundraising of 22,000 euros, 22% more than the previous edition.

The initiative, which ended last week at the Arola restaurant of the Arts hotel, has included the participation of 59 restaurants, eight more than in the previous edition, over 40,000 customers have sampled the tapas in the campaign and over 2,000 people have become followers of the project through social networks.

'La Tapa Solidaria' began last 3 October, with the support of some of the best-known restaurants in Barcelona, which have sought to do their bit to help the most needy. In total, €0.50 from the sale of each tapa created for the occasion were donated. The price of each tapa was €1.

Albert Adrià, the sponsor of the initiative along with his brother, Ferran Adrià, has asserted, in his statements to EFE, that "you need to be clever and that's why I used the olive tapa, which is the one I sell the most.  I haven't changed it because what matters isn't being creative with the tapas but raising funds". Sergi Arola, host of the event for the third consecutive year, has expressed his desire for "La Tapa Solidaria to stop being necessary someday".

Meanwhile, the president of Casal d'Infants, Lluís Prats, has made a very favourable assessment of the project and affirmed that the campaign has been "amazing". Furthermore, Prats added that "the success of this project isn't only selling twice as many tapas but getting twice as many people to do their bit in this project".

La Tapa Solidaria is a culinary initiative through which a support programme will be offered for childrearing and education of mothers and children under the age of three in the neighbourhood of El Raval in Barcelona. This project aims to succeed in creating positive relationships between mothers and children and for mothers to gain the necessary knowledge to face the future with the skills they acquire. For its part, Casal dels Infants state that they hope to use this same project in other neighbourhoods with the same needs. This organization aims to help children, youth and families who are on the threshold of poverty and ensuring equal opportunities the rest of society.