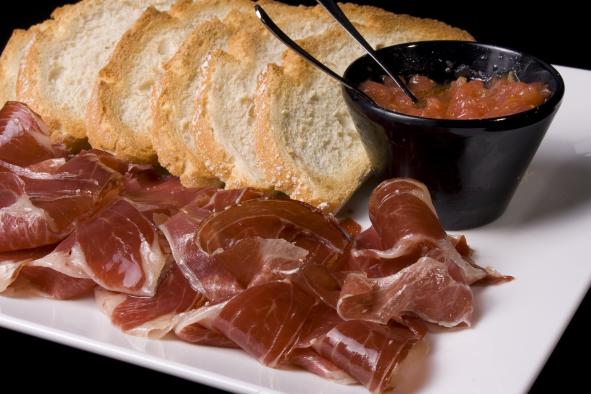 For years pregnant women have been deprived of eating cooked ham and other cooked meats as well raw meat and raw fish because of the risk of contracting toxoplasmosis, an infectious disease whose symptoms are, in most cases, very mild.  However, a person does not know whether or not he is suffering from toxoplasmosis until an analisis has been done. This disease is dangerous to the fetus and therefore of special interest to pregnant women.

Definately some raw or undercooked foods can cause this disease, however some experts assure that the best way to avoid it is by good hygien and strict diet.  In Spain, gynecologists are not unanimous on the matter and they give very different advice and recommendations.

The Beef industry's technological centre of Andaluz (TEICA) has recently performed studies in order to determine the occurence of toxoplasma during the preparation of cured ham. Preliminary findings of this study suggest that the ham is not dangerous for pregnant women.  Teica manager, Dr. Juan Carlos Racero, claimed in a statement to La Razon, that "the ham's curing process, the salt content and other factors make the longterm survival of the toxoplasmosis parasite non-viable."  Thus, according to the head of the Gynecology department at the Hospital of Guadalajara and the secretary of the Spanish Society of Gynecology and Obstetrics (SEGO), María Jesús Cancelo, "it has been proved that the ham is found to be safer after curing periods exceeding 24 months. Therefore, the longer the period of ham curation, the safer it is."  For this reason Joselito hams receive a minimum of 36 months curation and each cured ham is individually identified with an attached number. In the case of Joselito all hams enjoy a minimum of 36 months of healing and every ham is properly identified with its number of add . In addition to ensuring optimum consumption , this healing period gives this gem of gastronomy unique organoleptic properties , with a flavor , aroma and texture that will delight geniuses of gastronomy and the public in general.

In 2011, the Journal of Food Protection released the results of a pioneer study performed by specialists in nutrition at the University of Zaragoza on toxoplasmosis-infected pigs. Hams that were analyzed after a 14 month curation period showed no signs of the parasite in the final product.  Therefore the risk of contracting the disease from consumption is minimal.